Every island has its fables and folklore and Redang boasts a few of its own, though nothing that would attract Josh Gates and his Destination Truth team out here. There is supposedly an inexhaustible pool of water at Pasir Gontang while the air at Puteri Mayang Mas at Pasir Mak Kepit is filled with the lingering fragrance of a princess who once lived there long ago. Tales are told of stones and rocks which were once sea-elephants at Batu Gajah (Elephant Rock), fowls tied to a rock at Pasir Macam Ayam, people immortalized in prayer at Batu Tokong, and a turtle guardian at Batu Pepanji (Turtle Rock). Over at Batu Surat (Letter Rock) near Pasir Chagar Hutang, a cluster of stones are supposed to contain some sort of message left behind by the Orang Bunian, magical residents of Redang. I guess imaginations do run wild when one has too much sun on a small island with nothing to do. 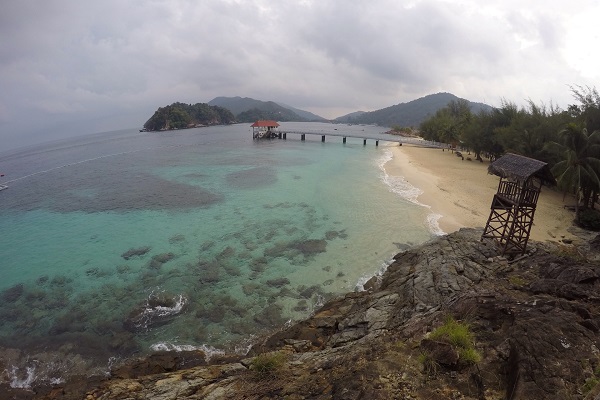 Redang is the first of the Malaysian Marine Parks to have a Marine Park Centre. Established in 1990, the Centre is located at Pulau Pinang, just off the southern tip of Pulau Redang. It acts as a focal point of administration and management and also provides facilities for research and education purposes.

This is one of the most popular snorkelling destinations due to the large number of fishes and marine life that are resident here, including giant groupers and moray eels. Almost all resort snorkelling packages will include a trip to the Marine Park Centre. Usually the resort operator will collect the Marine Park fee from visitors.

Boats will drop visitors off at the jetty, which is used by many as the jump-off point for snorkelling. There is also a shipwreck to the east of the jetty, probably the only wreck shallow enough for snorkellers to explore.

Most visitors will just spend all their time in the water. For those who don’t want to wet their feet, you can head for the beach and explore the island. Turn right and follow the broadwalk all the way to the end, then go left up the hill. There is a hiking trail on which will bring you to a viewing tower at the top of the hill near a lighthouse, where you can get a nice panorama of Redang island across the channel.

If you turn left at the beach and walk all the way to the northeastern corner of the island, there’s a small rocky outcrop including a mound made up of bits and pieces of broken coral. From here, you have a good view of both the northern and eastern shores of Pulau Pinang as well as Redang across the channel.

Most of the buildings in the Park Centre are for Marine Park staff and visiting researchers. There is an exhibition centre open to visitors where baby turtles from the park’s hatchery are sometimes put on display. From the jetty, head towards the beach and turn left at the broadwalk. A little further down from the hall at the end of the broadwalk is the park’s turtle hatchery. 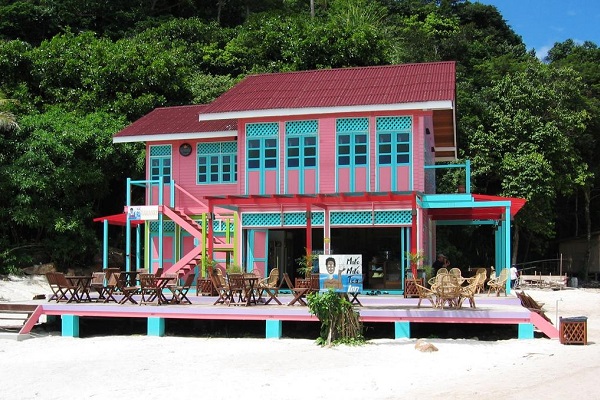 The hit Chinese romantic comedy movie ‘Summer Holiday’ (not related to the famous 1963 Cliff Richard movie) starring Sammi Cheng and Richie Jen and directed by Hong Kong director Jingle Ma, was partly shot on Redang. The movie, released in 2000, contributed much to the recent popularity of Redang.

The original ‘Mo Mo Cha Inn’ (More More Tea Inn) featured in the movie was located between Redang Reef and Redang Beach resorts, where Laguna Redang now stands. The actors stayed at Redang Holiday while filming on location. The original inn was left in quite a dilapidated state and was in danger of collapsing, so the owners of Laguna tore it down and rebuilt a replica which now serves as Laguna’s gift shop. The coconut tree on which the ‘More More Tea Inn’ sign was hung on the movie set is still standing in front of Laguna Resort’s main building. Sunrise is something not to be missed, even if the thought of waking up at 6am in the morning is not your idea of a holiday! Those living at Pasir Panjang or Teluk Kalong have front row seats to a breathtaking view, provided the weather is good and there are few clouds in the sky.

There are no resorts located on the western side of Redang so to catch a sunset, your best option is to charter a boat or sign up for a sunset cruise, available at some resorts.

On a clear night, gaze at the heavens and be amazed at the myriads of stars in the night sky. Look long enough and your eyes will adjust to the darkness, revealing even more stars. If you’re lucky, you might even see a few shooting stars. If you’re into stargazing, bring your star maps or better yet, if you’ve got an Android smartphone with GPS, load it up with Google Sky Map and spot all your favourite constellations and nearby planets. And if you’re a really serious stargazer, bring a telescope – we even managed to spot one of Mar’s moons!

If looking up at the sky is making your neck ache, look down instead. Bring your torchlights and go beachcombing at night, especially if the tide is out. Among the rocks and tide pools you’ll spot crabs, hermit crabs, mudskippers, tiny crustaceans and other small active nocturnal creatures. In some really dark areas of the beach, particularly near Redang Reef Resort, sweep the sand at the water’s edge and you might spot some tiny blue specks of light. Known commonly as ‘blue sand’, these are tiny crustaceans known as ostracods, which give off bioluminescent blue light as a defense mechanism. 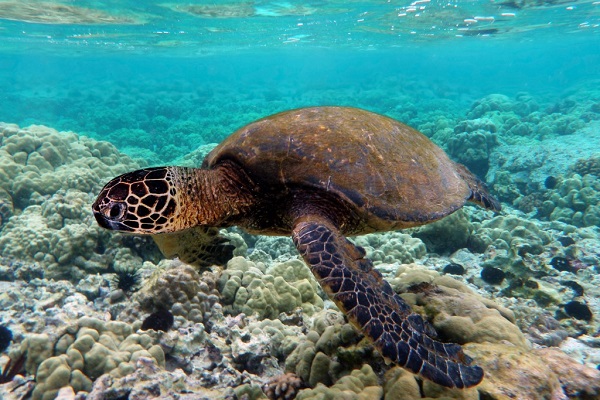 Two species of turtles visit Redang to nest. The most common is the Green turtle followed by the Hawksbill turtle. The nesting period for Green turtles is between March to December with a peak in August. Hawksbill turtles usually nest between January to September with a peak in May. Favourite nesting spots in Redang include Pasir Chagar Hutang, Pasir Mak Simpan, Pasir Mak Kepit, Pasir Bujang and Teluk Dalam.

Although turtles prefer quiet, isolated beaches, there have been rare occasions when they have nested on quieter parts of Pasir Panjang beach. If you’re fortunate enough to see a turtle coming up the beach to nest at night, try to observe it quietly without disturbing it.

The beach at Pasir Chagar Hutang is off-limits to visitors as it is home to a large green turtle rookery. The rookery practices natural incubation, that is, the turtle nests are left in their natural locations on the beach until the eggs hatch. Visitors can snorkel in the waters in front of Chagar Hutang as long as they don’t go up on the beach.

Things to do in Redang Island

EXCLUSIVE HOLIDAYS FOR ANY TRAVELLER

The only guide you'll ever need for travelling and visiting one of the most popular vacation islands on Peninsular Malaysia - Pulau Redang!