There are more than 20 dive sites to suit all skill levels, including beach dives and challenging deep dives, with a good mix of coral gardens, wall dives as well as sandy bottom offering plenty of opportunities for macro photography. The dive sites are all located nearby and are quickly accessible by speedboat.

For non-divers who want to have a taste of what scuba diving feels like, some dive center offer ‘discovery dives’ where a dive instructor or dive master will conduct a short briefing on how to use the scuba equipment before personally bringing participants out on a shallow reef dive lasting about 30 minutes.

Diving in Redang Island is not that expensive and many dive operator schools are happy to make adjustments according to your need. The island is very accommodating in this regard and offers underwater cameras, extra equipment if needed and also instructors to help you around.

Since it is a tropical island so there is no need to be worried about the cold water. The water is mostly warm enough for diving as well as swimming. 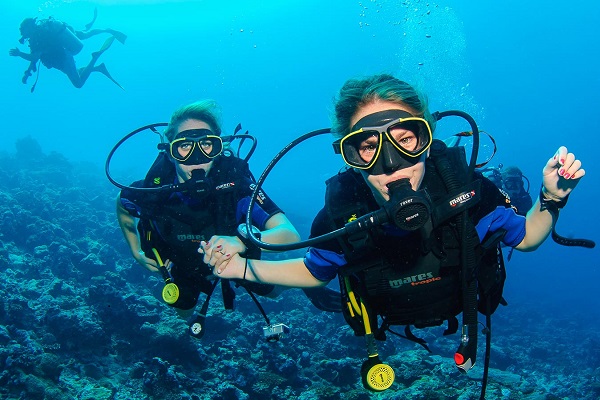 Among the three northern sites, Tanjung Tokong and Tunnel Point are the most popular, offering abundant fish life in waters with a maximum depth of 30 metres. Tanjung Lang is the shallowest, offering fans, whips and other corals in waters up to a maximum depth of 18 metres. The corals at these northern sites are among the healthiest in Redang as that they are situated away from most resorts and are in close proximity to the protected beach at Chagar Hutang which is off-limits to visitors as it hosts SEATRU’s turtle conservation efforts.

As its name implies, at Tunnel Point large boulders pile up in such a way as to form tunnel-like structures that divers can swim through, offering a different underwater experience from the other dive sites. At one point, attentive divers can hear a boulder creak when surf pushes it and causes it to move, rubbing against other boulders. Gorgonian fans can be found clinging to the wall surrounded by soft and hard coral covering the reef. Bumphead parrotfish, small barracudas, jacks and nudibranch can all be encountered here.

Tanjung Tokong is situated very close to Turtle Bay at Chagar Hutang where SEATRU has its field station. As such, it offers greater opportunities to spot green and hawksbill turtles. The sea here can get rough at times but divers will be rewarded with the diversity of fishes and other reef life found here, including jacks, snappers, napolean wrasse, fusiliers, nudibranch, flatworms and the occasional shark. Many boulders are covered with soft coral, sponges and sea fans. Keeping the reef on one’s left, divers can head into Turtle Bay where colorful hard and soft corals abound.

At the northeastern tip of Redang, Tanjung Gua Kawah tends to have strong surface and deep-water currents and is best left to experienced divers. Rocks and boulders descend to sandy bottom at around 15 metres. Coral growth is average but due to the currents, there are opportunities to encounter pelagics in the open water, and other fish life in caves and under overhangs. 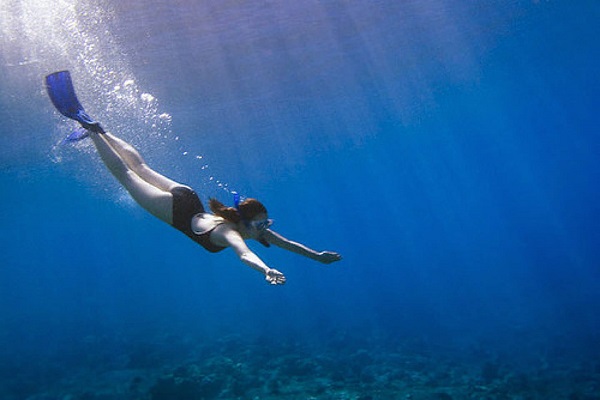 Due to their easy accessibility, the housereefs at Tanjung Tengah and Tanjung Mak Cantik in Pasir Panjang are good for snorkelling, day and night beach dives and discovery dives. The waters are no more than 15 metres deep and divers will often encounter baby black tip sharks and the occasional adult. Don’t forget to look under rocks and table coral. Often, one will find one or two Jenkins whiprays.

A stone’s throw away from Pasir Panjang are the islands of Pulau Paku Besar and Pulau Paku Kecil which are popular snorkelling haunts but also have enough to keep divers happy. The sandy bottom areas around these islands provide encounters with schooling razorfish, pipefish and other bottom dwellers.

Chek Isa is a submerged reef that starts from 8 metres and progresses down to a sandy bottom 20 metres in depth. It is characterized by two enormous boulders carpeted with different species of soft corals, sponges and hydroids. Cowries, spider shells and colourful Christmas tree worms are often encountered together with angelfish, parrotfish, wrasses, groupers, schooling batfish and other reef dwellers.

Close to Chek Isa is Mak Cantik (which means ‘beautiful mother’ in Malay), an underwater seamount in waters 12-18 metres deep that’s home to a large coral garden comprising many hard and soft corals. Some divers prefer this to Chek Isa as the coral gardens here are prettier, with some lovely coral anemone gardens. Like Chek Isa, mild to moderate currents are sometimes encountered. When that happens, look around for chance sightings of pelagics. 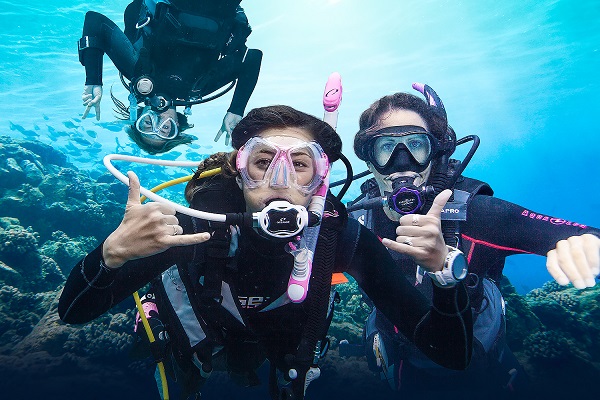 If there is one place in Redang that qualifies as a macro photographer’s wonderland, it must be Cina Terjun, one of my favourite sites in Redang. It might as well be called ‘eel and lion fish city’ too since divers are almost certain to encounter these here.

The sandy bottom fringing the reef is home to many stingrays, while scorpionfish and stonefish lie camouflaged against corals. Lionfish and porcupine fish shelter amidst a garden of sea whips, while schools of large puffers swim nearby. Small cat sharks, bamboo sharks and leopard sharks can be found sleeping under rocks.

This spot offers great day and night dives at depths up to 18 metres in fairly calm waters, so it is suitable for novice divers too. Shine your torch into a hole or crevice at night and chances are you’ll see an eel.

Northwest of China Terjun are the islands of Pulau Kerengga Besar and Pulau Kerengga Kecil with a large expanse of shallow reef which is ideal for snorkellers as well as novice divers. If Cina Terjun is ‘eel and lion fish city’, Kerengga is ‘ray city’ as the shallow sandy bottom around it is home to a large number of rays and a few sharks. The diving around Kerengga Besar is in relatively calm and shallow waters up to about 15 metres maximum depth. A coral garden comprising both hard and soft coral lies between the two islands. Humphead parrots, snappers, tuna, jacks and trevallies may be encountered at the reef, while many species of shrimp and crab may be found especially during night dives. 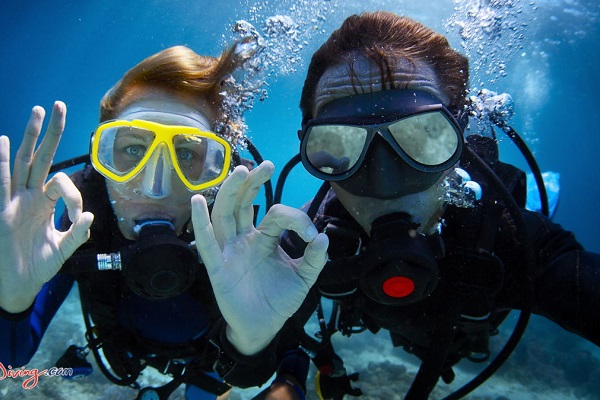 Terumbu Kili, a rocky outcrop that appears above water and slopes down to a sandy bottom at about 20 metres in depth, lies at the southern tip of Pulau Pinang and is one of the top dive sites at Redang.

Beware the strong surface currents in the channel separating this outcrop from Pulau Pinang. Due to the strong currents, this site is best left to more experienced divers. Those who take the plunge may be rewarded with sightings of occasional blacktip sharks, barracudas, jacks, snappers, fusiliers, jellyfish and schools of yellowtail. A coral garden of leather corals, soft coral, whips and fans occupy several ledges on the slope front. Hawksbill turtles are commonly encountered here.

Pulau Ling, a small rocky outcrop with no beach, used to be a popular dive spot in Redang with 2 massive, mushroom-shaped coral heads, believed to be the among the largest coral structures on the East Coast of Peninsular Malaysia. Estimated to be hundreds of years old, the larger head measures 24.5 metres while the smaller head measures 23.2 metres at their base circumference. These can be explored at relatively shallow depths of 10-20 metres. Caves found at the bases of the two heads are home to angelfishes, moorish idols and cardinal fish while the overhangs of these caves are encrusted with brilliant orange daisy corals.

North of Pulau Ling, Batu Chipor is marked by a buoy about 20m away from a tiny rocky outcrop barely exposed during high tide. Although a fairly shallow dive (8-15 metres), the sea around it can be choppy with currents and it is more suitable for experienced divers. The rocky wall is covered with soft tree corals, leather corals and fans, while the sandy bottom is covered mainly with hard staghorn, lettuce and boulder corals.

Both these dive spots are now less frequently visited by divers due to the large increase in boat traffic which pass these areas.

The northeast tip of Pulau Ekor Tebu comprises mainly steep granite boulders dropping to 24 metres where it hits the sandy bottom. An underwater cave can be found at about 20 metres depth. Look out for healthy staghorn, table and lettuce coral. Sightings of trevallies, black tip sharks, pompano, barracuda, batfish and the occasional eagle ray can be expected especially when there are currents. Giant clams and other shells can also be encountered. 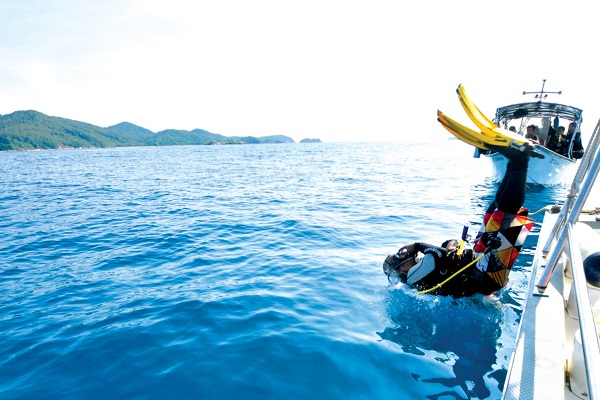 If you are a fairly new and inexperienced diver, here are some tips for safe diving.